The Gaijatra series of works was created in 2010 The country was in chaos. The series fully follows the ethos of the Gaijatra festival, a strange mixture of devotion and licence to ridiculise the powerfulls. The paintings parody the current political fiasco and the power-hungry politicians of Nepal.

In 2019, this series of works was a part of the exhibition “Nepal Art Now” in Welt Museum, Vienna.

“Kasto Gaijatra” means in Nepali language “chaos”. The series was inspired by CHAOS in Nepalese politics. I see Nepal in a permanent Gaijatra situation, the unending political feuds and chaotic situation persists in the country. And for the awareness of all this, I echo a wake-up call through my symbolic images in the paintings.

The Gai (cow) symbolizing Nepal as the enduring mother nation, but beset by lions with snake-like tongues and tails, symbolizing the so-called rulers of the nation and the Goddess Kumari, temples and chaityas symbolizing the cultural dignity of our country make up most of my paintings. flying or suspended images, and with the additional sense of Gaijatra, subjects are even more topsy-turvy than usual. There are multiple of symbolic images on a single canvas.

In one of my paintings entitled “Divided Nepal,” the beasts or lions clawing on a cow shred her to pieces as the eyes of Kumari watch in distress. In another, while the beast donning a bhadgaunle topi (hat) leaps greedily onto a chair, the cow stares at it, all powerless. Dismantled traffic lights, electric wires, dysfunctional bulbs, cows milked excessively till they bleed, and alarming temple bells are some repeatedly used themes and images in my paintings.

For colors, I stick to bright yellow, pink, green, red and white, keeping in tune with the festive spirit of Gaijatra. Cows are also ornamented likewise in the festival. The politicians use the name of the public in their speeches in very ornamented and different ways for the sake of public support, but they aren’t even concerned about what the public wants.

This series was created in 2010, but the country’s innocent people are still suffering with the Gaijatra situation. The Gaijatra continues as CHAOS NEPAL. In 2019, this series of works was a part of Nepal Art Now in Welt Museum, Vienna. 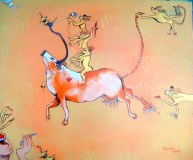 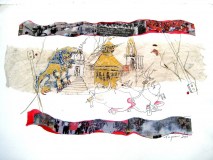 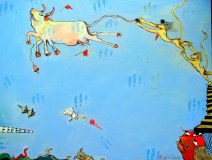 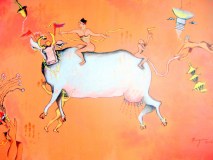 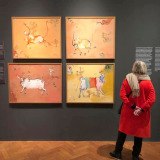 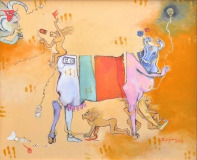 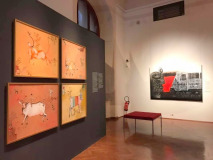 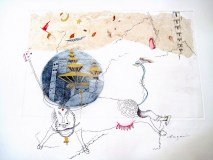