The People’s power series was created during 2006 – 2007 just after the revolution. The compilation of prints is inspired by the popular uprising in Kathmandu during April 2006. It overturned the one man rule imposed by King Gyanendra and restored the parliament prerogatives.

This revolution ended the long civil war of Nepal. Thousands of Nepalese had to lose their life for Democracy. The series talk about the pain, struggle, blood  of Nepalese people to get freedom and democracy. Pieces of newspaper related to the events have been incrusted into the etchings to give a realistic feeling.
The exhibition of this series raised funds to support the martyrs’ families.
Read more 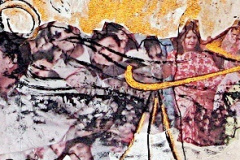 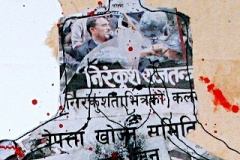 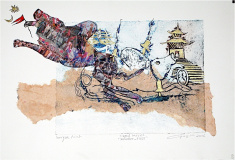