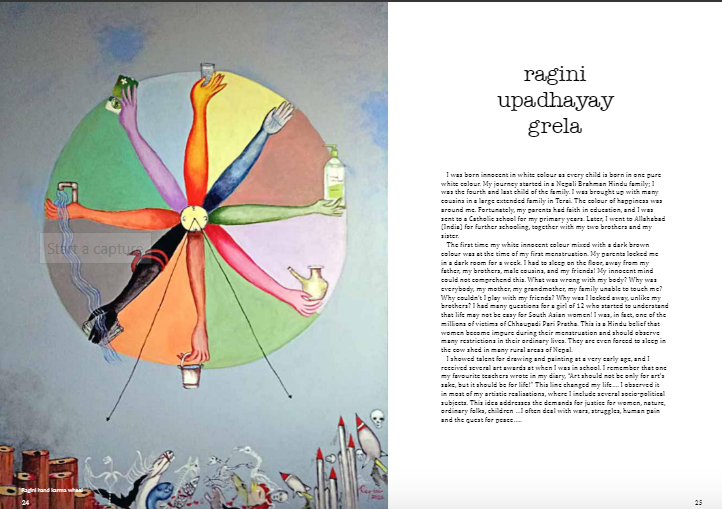 A beautiful presentation of the evolution of my art..

View my page on Artsome.co

Nepalese artist Ragini Upadhyay Grela has never been afraid to ask questions through her art, which has revitalized the satirical tradition of social commentary in the art of Nepal. She is exceptional in identifying contemporary ills be they of the environment or socio-political issues.

Nepal’s art world is dominated by men. Hindu and Buddhist religious paintings, for example, such as the Newar paubha and the Tibetan thangka are traditionally made by men. Western influenced academic and modernist traditions as well as contemporary art have been so dominated by a male vision that the emergence of distinct female voices in art—such as that of Ragini Upadhayay Grela—introduced a new worldview and visual language. Art historians have summarized the phenomenon “as the profession of painting was traditionally a man’s world, contemporary art produced by Nepali women speaks forcefully of a shift towards a perception of a world often centring around their gendered identities: of self, body politics, gender and sexuality.” Ragini Upadhayay Grela, who was born in 1959, is one of the most important artists in Nepal. And with nearly 60 solo exhibitions in Asia and Europe she is perhaps the most prolific woman artist of her generation. She moves as well with ease between printmaking and painting.

Myth and politics have always been a strong and inextricable themes in the artistic career of Ragini Upadhayay-Grela, one of the few fully professional artists working in Nepal today. The title, The Myth of Politics, for her most recent exhibition of 21 paintings was borrowed from an American academic who interviewed her for a thesis on women in South Asian political life It is from this that Upadhayay-­Grela explores the joining of power and human destiny. At a more local and contemporary level, it also portrayed elections in Nepal (in November 1994) which saw the collapse of the ruling Congress Party and the installation of the Communist Party Nepal-Unified Marxist Leninist (CPNUML) minority government.

One work which stands out in contrast to the turbulence is Let Them Bark. I Go My Own Way, dedicated to her late father and a centerpiece to the show. This rather proud and defiant title could easily serve as a motto for Upadhayay-­Grela’s artistic career. The I of the painting is an impressive elephant lyrically depicted in motion and profiled with several heads at either end. Inside the elephant, Upadhayay-­Grela has suggested a landscape with angular distant mountain peaks and spiraling water. In the foreground is a consistent symbol in her work, poetic birds in flight or contemplation. Encroaching upon the elephant (but no match for its serene and steady course) is the multitude of hounds suitably cruel and ferocious-looking but obviously more bark than bite. These hounds also border the top of the painting and fulfill the failure of their futile menacing by appearing to chase their own tails.

The timelessness to which Queen refers in The Myth of Politics relates not only to human politics but also to rudimentary forms, subtle layering of handprints and color absorption into the handmade paper which evoke the aura and vitality of ancient rock art. It would be wrong, however, to think that Upadhayay-Grela’s paintings only offer a ‘bemused’ response to political life. The symbols in her narrative reveal a far more profound and poetic investigation. Game of Blood, for example, makes no pretense about the brutal culture of politics while drawing upon a uniquely Nepalese blood-lust context with the Kumari, Khukuri, and goat.

The Myth of Politics sheds some light on issues raised in a recent overview of contemporary art in Nepal (Asian Art News, Volume 4, Number 5, September/October 1994). Politics is an integral part of Nepali life which in some way accounts for Upadhayay-Grela’s choice of theme, as her artistic intention has always been to produce socially meaningful and relevant work. Among the obstacles facing Nepal’s contemporary art community the most prevalent is a lack of exposure and exchange. Upadhayay-Grela’s enormous body of work builds effectively on the Nepali traditions and techniques with a universality and individuality that exposes the limitations of national or contemporary classifications.

In terms of exposure and exchange, Upadhayay-Grela’s career echoes the path of the more successful Nepalese artists with initial fine arts training abroad (India) and participation in a number of international workshops, residencies, and exhibitions. Being part of a more global contemporary art scene has no doubt given the humanism of her work greater scope, opening it up to varying modes of expression and more sophisticated media, particularly in terms of printmaking. With The Myth of Politics, Upadhayay-Grela shows that, although she is an artist in constant quest of new ways and forms of expression, she remains true to the symbols and subject matter which are close to the heart of her Nepalese cultural heritage.

In Election 94, Upadhayay-Grela built upon the imagery used by the two elections rivals: the Tree for the Congress Party and the Sun for the CPU‑UML, as well as party flags and political slogans. Throughout Nepal one finds a proliferation of these two key symbols vying for public wall space. Ragini did not hesitate to explain that the prominent tree with its attendant mermaid-goat on the left- hand side of Election 94 was a direct copy of an ancient Nepalese folk symbol. For Upadhayay-Grela the appeal of such symbols lies in their potent contemporary and ancient duality and this is arguably the overall strength and effect of the exhibition. A central motif in Election 94 and another, the ten-headed human form based on the tenfold incarnations of the Hindu god Vishnu, complete with the prosaic addition of sunglasses and umbrella represent the duality of the political climate perhaps, with the Communist Sun, for the time being, victorious above.

The Myth of Politics was met with a number of enthusiastic reviews in the local press. A review in the newspaper The Rising Nepal challenged the degree to, which Upadhayay-­Grela had delved into such a loaded subject as politics given its heightened Nepali context. The criticism was, in part, a response to the artists’ reliance upon children’s folk storytelling traditions as the allegorical Truth behind many of her paintings: for example, The Rabbit and the Tortoise and The Matsyanyaya Big (Fish) Eat Small Fish. Perhaps it is fair to say that Upadhayay-Grela is more interested in myth than in politics. Her intuitive style and the unequivocal morality of these folk narratives blend a child-like simplicity and wonder to these paintings which is part of their charm.

Dr. Abhi Subedi observed in his catalog essay: “Ragini’s political paintings do not project the grim and violent post-modernist images of the political myth of the recent times.” There is unbridled optimism in the love of experimentation, in the vitality of her symbolism and the continuity of her artistic­ folklore heritage. As with all mythology, her work conveys a sense of timelessness, partly because of her technique, but mostly because of the human players in her narratives, those who are hungry for the power of The Chair, but are no more than the spirit of mythologies that have come before and will ultimately outlive them.